This EOL Policy applies to all Appeon products (“Software Programs”).  It defines the lifecycle of each Software Program and the types of technical support available during this lifecycle.  Appeon reserves the right to modify the EOL Policy upon 180 days written notice posted to the Appeon Website.  As such, it is recommended that you periodically check this page for revisions.

Appeon makes versions of the Software Programs as follows:

Revisions are essentially minor versions of the Software Programs.  Specifically, a Revision is a Major Version that has been revised to include some minor new features and usually incorporates the latest bug fixes (at the time of the Revision’s GA).  All Revisions go through Appeon’s full QA process, but generally they do not go through any beta testing since Revisions are inherently relatively low-risk versions.  You can identify a Revision by the acronym “R” appended to the Major Version numbering (e.g. PowerBuilder 2017 R3).  The introduction of a Revision for a Major Version does not extend the EOMM date of that Major Version.

LTS Versions are Major Versions or Revisions that are eligible for long-term support.  Only selected Major Versions or Revisions will receive the LTS designation, and usually only after being on the market for a period of time to ensure a relatively high-degree of reliability.  LTS Versions are eligible for Standard Support[1] for a minimum period of 60 months, of which there would be at least 18 months of overlap in Standard Support with a replacement LTS version (the ideal time to migrate to the replacement LTS version).  LTS Versions are recommended for users that prefer to upgrade at a slower pace and are not in urgent need of the planned product roadmap features.

MRs are a collection of bugs fixes for a Major Version or Revision – MRs contain no new features.  All MRs go through Appeon’s full QA process.  You can identify an MR by reading the accompanying ReadMe document and the fact that it requires a Major Version or Revision (as applicable) to be already installed.  In general, it is a good practice to stay up-to-date on MRs since they are intended to improve the reliability of the Software Programs and are generally very low risk.

EBFs are a patch for a Major Version or Revision that fixes or works around an emergency bug – EBFs contain no new features.  EBFs do NOT go through Appeon’s full QA process, which makes them relatively risky to apply.  You can identify an EBF by reading the accompanying ReadMe document and the fact that it requires a Major Version or Revision (as applicable) to be already installed.  Appeon discourages EBFs, and all use of EBFs shall be at your own sole risk.

LPs are language packs for a Major Version or Revision. Each LP is a set of PowerBuilder localized runtime files for eight European languages: Danish, Dutch, French, German, Italian, Norwegian, Spanish, and Swedish.

This EOL Policy builds upon Appeon’s Standard Support policy, setting forth the timeframes Appeon has currently planned to provide maintenance and technical support for the various versions of the Software Programs. Premium Support[2], which is offered at an additional cost, offers assistance with technical issues that are discovered after the Software Programs is EOMM but before it is EOL.  To open a Standard Support or Premium Support ticket please refer to /developers/get-help.html.

The End of Life timeline is set forth in Figure 1 and Figure 2 below. 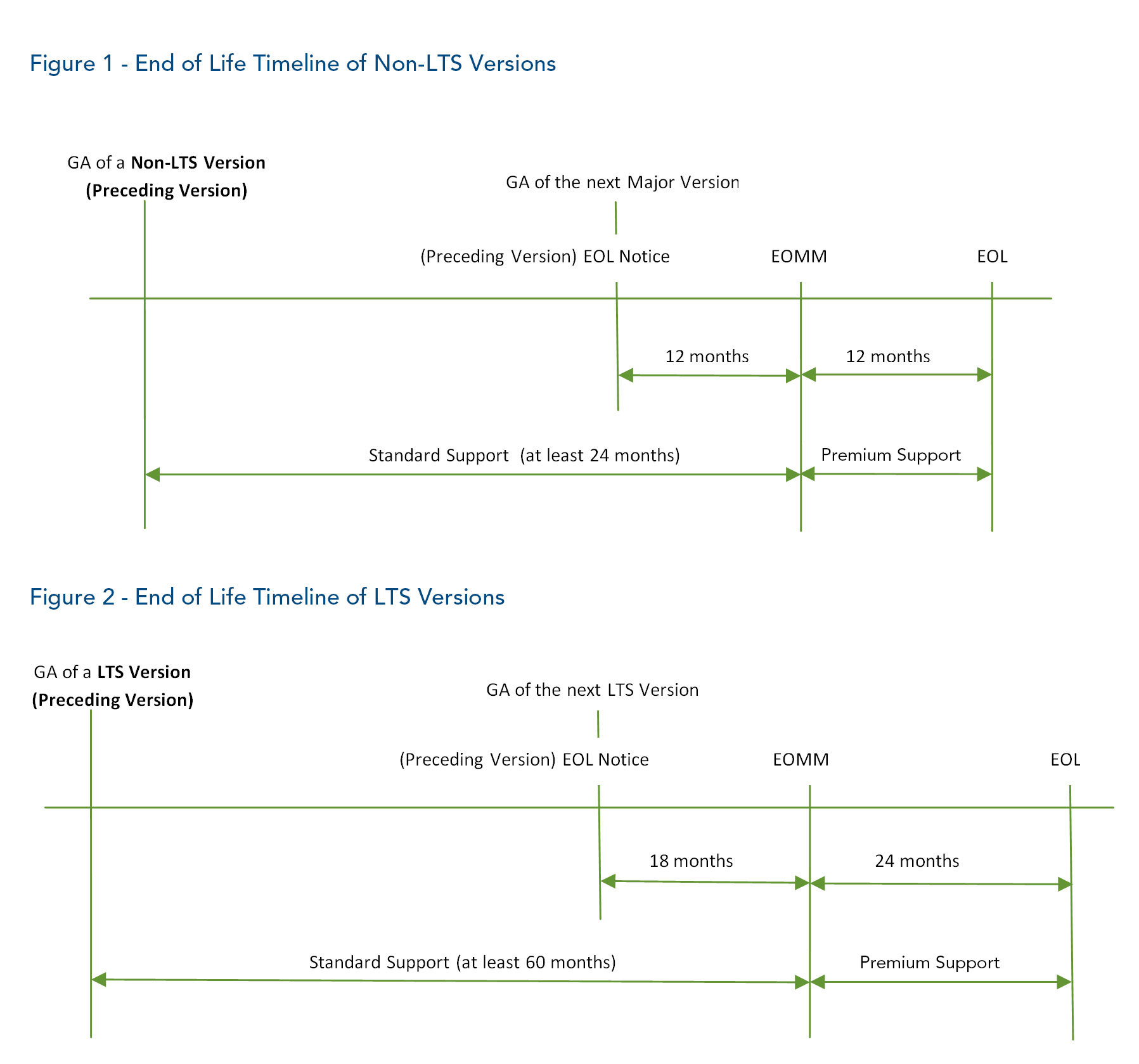 Acronyms used in the above figures are explained here for reference:

End of Mainstream Maintenance (“EOMM”) means the date Appeon will cease providing Standard Support for the applicable version of the Software Programs.  Prior to the End of Mainstream Maintenance date, Appeon will actively provide maintenance for the Software Version, which includes workarounds, emergency bug fixes (“EBF”), and maintenance releases (“MR”).  When a version reaches the EOMM date, it will, however, no longer be generally supported by engineering.  Specifically, Appeon will no longer provide any MRs for any software defects of the applicable software version, and EBFs may be provided under limited circumstances to customers that have paid applicable Premium Support fees.

[2] Premium Support means assistance with software defects that are discovered after EOMM but before EOL; the assistance is usually in the form of workarounds and in limited circumstances in the form of EBFs, and is subject to additional support fees.